I had been looking for a lightweight distro to install on my old computer along with Mepis 8. I already have antiX and Galpon MiniNo on another system, so I know they work well. However, I wanted to try something new. I tried other distros, but my old box gave them different headaches.

Bodhi Linux was a good candidate. I downloaded the E17 version and I liked it very much. After trying it, I installed it and started configuring my new Bodhi system. But then, I hit a forgotten wall: enabling sound on this old box is a nightmare for an inexperienced user like me. I had forgotten to test the sound on Bodhi...and to my dismay, Bodhi was mute.

I recalled SliTaz. I had tried to install it some time ago, but my lack of experience overpowered me and couldn't install this distro. It was time to try again.

This time the installation went without a glitch. Before I knew it, I had SliTaz working on my computer. I had to manually adjust Grub to have entries for both Mepis and SliTaz, but I learned how to do that long time ago.

To be honest, it took me some time to adapt to this Linux distro. I do like its logo: the spider looks great! Another great aspect is that it mounts my Toshiba USB 3 external drive. It also mounts my G-Shot camera without a problem.

Now...this lightweight distro comes with its own small programs, but I wanted to see if I could find my way into its repositories and extra software. Apparently, I could do it: 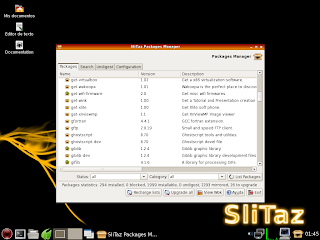 OK...I found OpenOffice.org there. Could I install it in such a lightweight distro? Would SliTaz work fast with such a big office suite? I downloaded it; it took quite a long time, but apparently it works well. My computer didn't hang up in spite of its scarce RAM, lower than 1 Gb. Then, I downloaded a few games and programs: 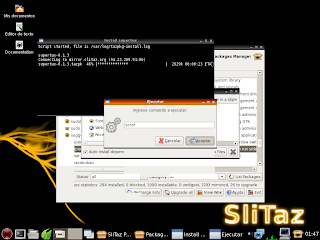 In the image above, I was trying to run Scrot, a screencapture tool, while SliTaz downloaded the game SuperTux.

Finally, I downloaded the software I wanted (The Gimp, VLC, Pidgin, Firefox, er--Shiretoko..and so on: 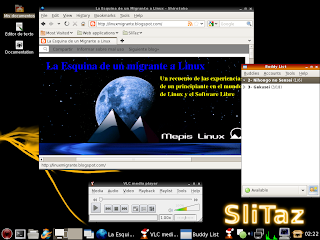 Now, I am a happy SliTaz user. In fact, I am posting this entry from SliTaz! I still have to get used to this Spider Linux, but so far I must say my personal experience with it has been worthwhile. I'll start a new year with a new friend!

Did I mention that it takes less than 30 seconds to load?
Publicado por Megatotoro en 13:37 No hay comentarios: 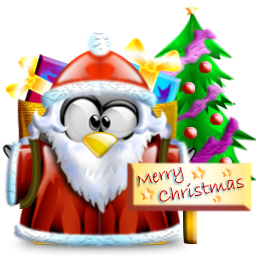 This is my second Christmas as a full GNU/Linux user! My computer hasn't exploded, I was able to get all my work done (and even more!), learned a lot about computers, didn't get malware problems, have the fastest and most stable system ever...and even got quite lazy with the back-up ritual that I used to perform every 2 months during my Windows days.

Anyway, distro and OSs wars aside, I wish all my readers the best for this season!

And now...what is on my Linux Christmas list? Let's see:

1. A USB thumb drive that can be plugged in regardless of how you try to insert it.
2. A Toshiba netbook with Linux preinstalled.
3. A Canon printer with full Linux support.
4. A Tech-support line whose personnel does not tell you "go to the button 'start'."
5. A university application whose installation manual does not include "drive C:"
6. A Microsoft EULA that actually cares for user rights.
7. The terrible, epic, all-platform virus equally affecting Windows, MacOS, and all Linux distros that a Windows fanboy once said it was easy to design.

What about your lists? What would they include? :P
Publicado por Megatotoro en 8:25 5 comentarios:

Today, I learned from Joany, a fellow Mepis user at the Mepis Community Forums, this nice trick to make files immutable. She says:

"Occasionally, changes to a configuration file that are done manually won't "stick" because a process resets those changes back to default values. Changing file permissions to "read only" does not work when root owns the file and the process making the change."

If you make the file immutable, then nothing or no one will change it, not even root.

So, how does it work? You just have to enter as root this command:

If you need to alter the file in the future, the code below will return your file to its normal properties:

Hehe! I'm eager to try this trick with the next immutable malware file that gets into my USB pendrive! Thank you, Joany!
Publicado por Megatotoro en 16:48 3 comentarios: