What Is Going on?

It seems that things are not too bright in the world of PCs.  In the Linux camp, a number of previously well-known distros are falling into oblivion.  Some people list Zenwalk, Pardus, Mandriva, Mepis, and even Ubuntu.

At the beginning of this month, I had visited Distrowatch and got these numbers:

Number of all distributions in the database: 763
Currently, those figures changed:

Number of all distributions in the database: 763

Active distros in DW have fallen below 300, with two more discontinued distros and another two going dormant.

Still, Linux market share managed to grow from 1.52 in August to 1.65 in September, according to Netmarketshare.com.  I guess this is part of the evolutionary process Linux is part of.

Things don't seem so rosy for Windows users, either.  After a year since its launch, Windows 8 has not reached a double digit market share yet.  Last month, it was at 8.02.  I wonder if that number will grow past 15 due to the fact that in September, Windows 8.1 was at 0.87 (growing from 0.24 in August).  As 8.1 gets traction, Windows 8 will naturally die out. Also, let's not forget that the much forgotten Vista, during its best time (August, 2009), reached a market share of 19.01!  Windows 8 has conquered Vista's current market share, but it still has to overcome Vista's best score.  Will it do that?

Still, Microsoft apparently had some pretty serious issues with its 8.1 and RT upgrades.  That is no good news for Windows users.

Then again, given the new fast release model that MS is adopting, Windows 9 should be out in the second part of 2014, which would give but 12 months to both 8 and 8.1 to grow their numbers.

But wouldn't this lead to the horrible "fragmentation" that Windows users always criticized of Linux?  How will customer support manage to juggle Windows 7, 8, 8.1, and 9 (and probably some stubborn XP and Vista leftovers?) by then?  Those people will have a terrible time trying to do their job.

On the other hand, Mac OSX versions, combined, reached around 6.72 in August.  Last month, they climbed to 7.03.  More people seem to be choosing Apple products.

Although I don't know what is happening in the world of computers, I think it'll be interesting to see all this again in a year's time. 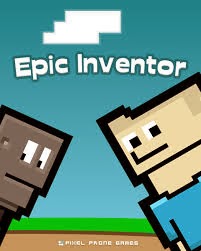 Thanks to Mechatotoro's wanderings in the lands of Steam and Desura, I also got to test the latter.  Browsing the games there, I found Epic Inventor.

Epic Inventor is a free game by Pixel Prone Games.  It's hard to classify it, unless Side-scrolling-action-RPG with a retro taste may be considered a valid category.


This game transports you to a fantasy world in which the land is full of monsters.  Monsters like wild beasts, giant bugs, trolls, flions (flying lions) and zombie walrusses look for you.  Scary, right? 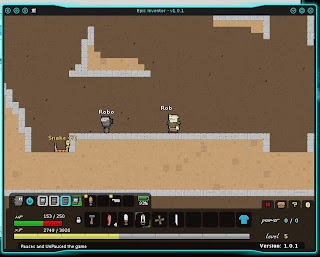 But you can't be scared.  The game places you in the shoes of a heroic inventor who, helped by his faithful robot, explores forests and caves in search for materials.  Those materials, when combined skillfully, will help him create tools, weapons, armor, and anything your imagination may reach.

Did I mention you have to grow your own crops in order to produce the food that will restore your health? 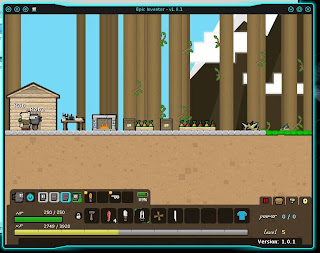 Yes, you also build cities in this game.  As you may see, I have a worktable, a furnace, two boxes I made to store items, two farms (a big one and a small one), and I also managed to build a thorn trap to keep some enemies off my land.

The game is really fun and quite addictive.  True, its graphics are not the latest greatest, but I really don't care about that.  I wish I had some more free time to actually become a true Epic Inventor!
Publicado por Megatotoro en 16:53 2 comentarios:

The Question of the Moment: Too Many Distros? 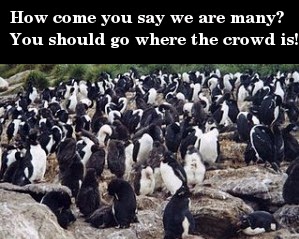 Currently, I'm swamped with work.  Whenever I manage to finish several items of my "to-do" list, I am rewarded with twice as many new ones.

Still, when I need to take a break, I've been able to play Braid (nice game!)   For shorter sanity-keeping breaks, Connectagram, Pynagram, and Circus Linux fit the bill.

Also, to expand my horizons, I've learned to create presentations with Inkscape and I've read some Linux-related articles.

Apparently, several sites have been asking their visitors their opinion on the number of Linux distros.  Results have been somewhat varied, although it seems that most people believe that the number of penguins in the wild goes from confusing to overwhelming.

Some say "just look at the name!"  Some call the penguin "Linux" and others point out that it should be called "GNU/Linux."  Eric, the Nocturnal Slacker, has also proposed the name Gnix.

From the name, we jump to distro numbers.  Currently, DistroWatch lists:

That's a lot of distros, surely!

But we still need to add the number of distributions on this site's waiting list: 312

Does that mean that there are too many distros for newbies?

Does that mean potential Linux users will get confused?

Does that mean duplication of effort and waste of time?

Is it better to have just 10 big distros?

Now...which ones would those be?  The first 10 from DistroWatch?

Currently, I have 8 distros spread among my different computers.  Interestingly, none of them is part of the top 10 of DW.  In fact, one of them is not even listed there!

Do they work?  You bet they do!  One day I use one, or several.  Another day I use another (or others)... My brain hasn't exploded because of that.

I think that Linux, or GNU/Linux, or Gnix, is an ecosystem.  A chaotic one if you wish.  That's why many people feel baffled by the number of penguins around and think it is better to limit them to an easily manageable number.

But that desire actually comes from the inner human need to control their ecosystem.  We want to rule over our world; we want to feel we are in control (even when we aren't.)  In spite of all our efforts to dominate our ecosystem, nature has always proved us wrong.

We'd better accept it:  Linux is free and open.  Freedom and openness also mean that anyone with enough knowledge can do whatever he or she sees fit with the tools that this person has.  As long as Linux is free, there will be new distros appearing and old distros fading away into oblivion.

We want a number of distros that is easy to handle?  Then, let's make Linux closed source, hand it to a small number of companies, and give our freedom up.

That's the way to go!  Who wants freedom anyway?