Maybe I should Go Back to Windows...

I noticed that lately I haven't been blogging as I used to back in 2010, when my Linux adventure started.

MS Office is trying hard to keep its user base while LibreOffice is increasing its number of users... and the later is also trying to imitate MS Office (Yuk! The hideous ribbon!)

I've literally seen lots of cases in which the great Windows 10 has failed miserably (to run, to enable video/sound, to connect to the Web), along with MS Office being unable to open documents made with other versions of MS Office (and then humble LibreOffice comes to the rescue).

I've seen other people using Ubuntu in a professional environment without any hassle...

All that has been very interesting.

Still, something troubles me.

All these years using Linux (my initial distro is well dead now, along with many other I liked the most) have shown me something about myself.

As a Linux user, I totally suck.

And I suck big time!

Seven years using Linux and I still don't have a clue using the CLI!

I remember the days when I started.  I knew nothing.  All my Power User Super Windows Guru Knowledge was utterly useless.  I had to learn from scratch.  And each day, I kept repeating to myself: "Don't worry.  You'll pick up the pace pretty soon.  Next year you'll be a Linux power user" (because a Linux guru was and still is way out of my league). 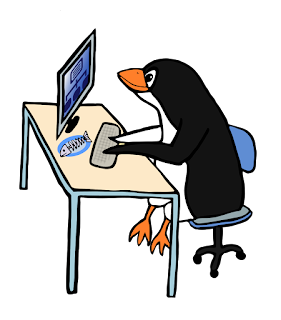 A year went by and I did not become a power user.

"Maybe next year,"  I thought.

One more year passed.  I told myself the same:  "Surely next year!"

No dice.  Is that what the Linux year really means?

How come I am a perpetual newbie??

And on top of that, the penguin is running so well these days that I on the verge of forgetting the few tricks I managed to learn!  What a shame!!

I feel so bored!  My desktop computer has been running for months without being turned off and the only changes I see are the different DEs I log into not to die of boredom.

Meanwhile.  I hear that Windows users are getting all the fun.

Since I suck as a Linux user, maybe I should go back to Windows after all.

I'll think about it.