Today I learned that Pardus Debian has just released its version 17.  That's quite a jump in the numbering scheme because the previous release was Pardus Community 3.0.  I guess now they switched into a year-matching number.

I am quite happy about the release because this distro appeared as "dormant" on Distrowatch.  With that, I had realized a couple of weeks ago that most of my preferred distros are either discontinued or dormant. Others are in an unknown status, although I prefer to call it "slow development process".

Anyway, even if Pardus Community 3.0 seemed unpolished and clunky, I downloaded Pardus 17 right away and made a bootable USB stick.  The menu came in Turkish and the booting process was pretty slow.  In fact, I thought I would get a show-stopper error but Pardus managed to get to the desktop after a while. 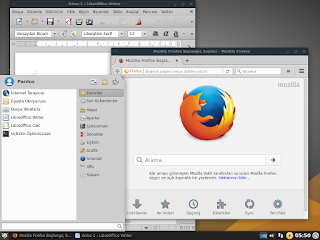 It is too late now for me to run the installer, so that'll have to wait.  Maybe I'll do it tomorrow, if I can clear some of my work first.  At least tomorrow I'll test this new Pardus on my ThinkPenguin Adelie, which is quite picky with Linux distros.  Maybe the kernel 4.9.30 of this release will be compatible with my moody laptop.
Publicado por Megatotoro en 20:48 2 comentarios: