Even Cats Want to Learn more about Linux!

A couple of days ago, my mother saw the Linux Magazine in a store and kindly bought an issue for me.  I took the magazine home and got ready to read it, but this is what happens when someone faster sees your Linux Magazine: 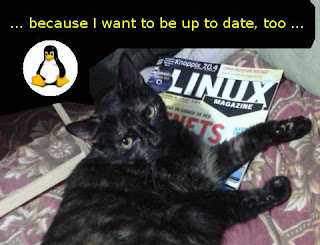 This gives a whole new meaning to the Linux command "cat"!

Have Fun with Splash Screens in KDE

One aspect of KDE that some like and others dislike is its almost extreme customizing potential.  Nobody beats KDE when it comes to let users change virtually every single component of their desktop environment.

I personally love having so many options.  However, I've never tried changing my desktop's splash screen.

Well, yesterday I decided to see if I could add a little variety to my desktop for its loading sequence.

Changing splash screens is very simple in KDE.  You just go to System Settings, and once there, you click on "Workspace appearance" under the category labeled "Workspace Appearance and Behavior". 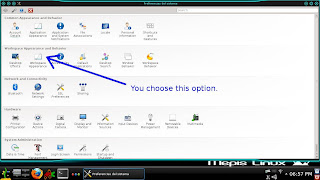 In the left panel of the window that opens, you choose "splash screen".

That will take you to the managing options of that category.  In the center panel, you'll see your installed splash screens.  If you want to add, delete, or even try some of them, you can do it by clicking on the respective button below that panel.  The rest of the window is a preview of whatever screen you select. 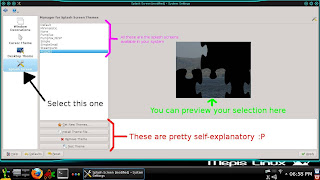 That is pretty much it.  I added one called "PumpTux" and slightly modified it to my liking using KolourPaint.  I like it because even if it is quite childish, its animation is funny and it is also pretty original: Tux pumps life to your system (literally!)  That reminds me of those good old times in which computers used to be fun and not simple corporate tools. 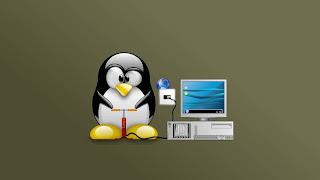 One important detail:  In case that you download a new splash screen, you must decompress it and place it in: /home/your_username/.kde/share/apps/ksplash/

To all the Slackers out there, CONGRATULATIONS!  May Slackware keep running for more and more years!

Working on Pisi: Display and GRUB 2

Since I installed Pisi Linux Beta 2, I've been using it steadily.  So far, I haven't experienced any crashes.  That's great!  I also installed the updates (quite a few, indeed) that my system showed.

Now, let's go back in time.  My Pisi system had a minor problem.  It was that whenever I plugged in a multimedia projector, it was recognized as a separate monitor, causing a double display; one was on the wall and the other on my screen.  Not a big deal; I could adjust the view from KDE System Preferences.  Easy.

Let's go back in time a bit more.  During my Windows times, lots of updates often caused system instability and problems.  I still remember when a system update literally ate my XP laptop, back in 2004-2005.  Not even the DVD drive survived! (Yes, it was an original, authentic, legal, pure XP install!)

Thus, having such a lot of updates for a beta system made me remember that painful experience...and others as well.

Interestingly enough, I didn't notice anything new after the update.  Pisi kept running, playing, working, and purring as it did when I first installed it.

Last Saturday, I decided to take Pisi to my class again.  I wanted to use several presentations with my students.  Due to the forgetfulness of the person in charge of the equipment, I got my projector late and couldn't test it before class.  No big deal; I knew how Pisi behaved and got myself ready to adjust the display settings with KDE.

But Pisi had another idea.  The smart kitten decided to pick the projector's signal and adjust it all by himself.  Wow! The updates did have an effect, and a good one!  My class went well.  Pisi did its work excellently.  I LOVE GNU/LINUX!!

The only thing left to be fully comfortable with Pisi, in my case, was GRUB 2. You see, although I was impressed by the elegance and beauty of Pisi's GRUB, there was still an issue that bothered me: some of my other Debian-based distros were shown in the menu as simply "Debian."  Since I have 3 that were presented like that, choosing them at bootup was more like trial and error.

I tried the tool for editing GRUB 2 that comes with Pisi.  No, it does not have an option to change menu entries.  Also, I am barely learning to use GRUB 2, so I had no idea how to edit them without an editing tool (I know how to use Grub Customizer, for example).  I tried to read here and there, but didn't find a newbie-friendly way to achieve my goal.

What did I do?  Well, I went to Pisi Linux World Forum and posted my question at night, right before going to sleep. Maybe someone more experienced would be willing to help me...

That was exactly what happened. The following morning, a fellow Pisi user had posted a very simple method to guide me through:

you can edit grub2.cfg (located under /boot/grub2/grub.cfg) as root. to do that, right click this file and choose root actions > open with text editor. enter your root password. find the debian menu entry and write what you want in the distro name area ' distro_name ' (the bold text in example) and save it.

And that did it!  That was as simple to edit as it was in GRUB 1 (or maybe more!)

Now I can say I am fully satisfied with my Pisi system, even if it is a beta.  Kudos to Pisi developers and community for this well-made little distro!