My View on the Article "Is the Open Source Software Movement a Technological Religion?"

I read the article "Is the Open Source Software Movement a Technological Religion?," in which Gil Yehuda compares the movement to religion.

Although he has some interesting points, I think actually closed source or proprietary software advocates are the ones who seem much more to be into a religion.

1.  Their leaders hide the truth (the code, flaws, etc.) from them and they simply accept it.

2.  They attack open source based on claims that have been given to them and that in many cases are not accurate.

3.  They do not have the will to investigate their products / leaders and take them as religious people take dogmas.

4.  They lack the scientific need to investigate and learn.  How many times they reject open source based solely on the claim that they "do not want to learn anything new"?

5.  They prefer to put up with the flaws of their software because "that's how things are".

6.  They are are not allowed to actually get into the depths of the software they use nor have the opportunity to change it.

7.  They let a specific corporation use them to its will and they happily keep giving this company as much money it asks from them, regardless of the product they receive.

Again, closed source advocates are more a religion in my perspective.  At least I have the freedom to choose and I will not go to software hell if I decide not to keep supporting a specific open source tool.
Publicado por Megatotoro en 5:56 2 comentarios:

What a surprise!  I learned that there was a release of PicarOS 2017 this month!

If you don't know PicarOS and you like GNU/Linux and have children, you're missing a jewel.  This is a GalPon MiniNO version made especially for children and with education in mind.  In my opinion, it is the most complete Linux distro for kids, and it is extremely attractive for them. Children love it!

The best part is that it is a fully featured system. I like to use it myself, and anytime I do, people get interested in this beautiful distro.  Too bad it receives so little attention from the media. 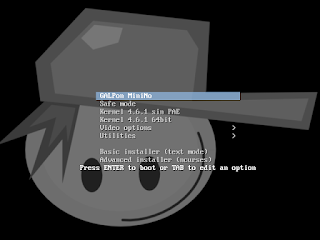 In terms of new features, I noticed that now it comes with the option of a 32-bit kernel, PAE, or a 64-bit one.  Nice!


To be honest, I did not see any extreme changes in PicarOS 2017, except that the minino-compiz feature seems to be missing in the menus.  Still, you can launch it manually. 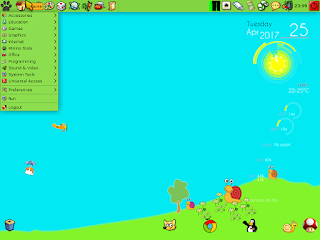 I have to keep testing it to see what else is new.  Thanks, PicarOS developers!! 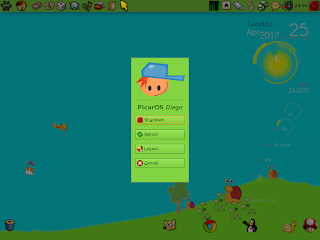 When My New Laptop Lost its Home...

I bought a new laptop from a Linux vendor some time ago.  The machine is a beast and it comes with a SSD for the root system and a HD for the home system. One day, I noticed that I could not enter my session.

After some checking, I realized that the machine was not reading the HD.  The BIOS did not show the entry for that drive.  Weird.

Now, what do you do with a computer like that?  Can you use it for working?

Of course!  I could log into a session from the root system and work from there.  Also, I could use my the clone of my system that I carry on a live USB pendrive.  Thus, the problem, although weird, did not stop me from working.

Later on Mechatotoro took my laptop to a repair shop and, as I thought, it all was caused by a hardware issue: the HD had somehow gone loose. Once it was put back into place, everything was normal again.

What did I learn from that experience?  That Linux is simply great!  While another OS would tell you that you cannot use the computer, with Linux I could keep working although the home system was unreachable.
Publicado por Megatotoro en 15:06 1 comentario: