A Quick Look at SliTaz 4 RC1

The iso file of SliTaz 4 RC1 is barely 34 Mb, so I downloaded it and gave this release a try.

First, Slitaz 4 RC1 has introduced some options for localization at boot-up: 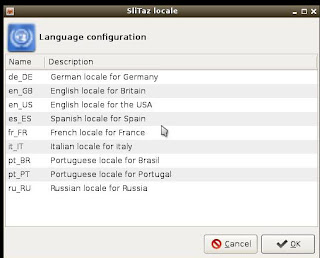 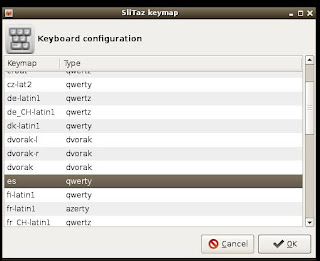 Once you choose your language and keyboard layout, you get SliTaz desktop: 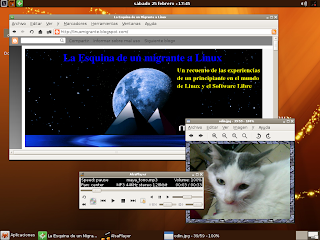 The browser is Midori. It has sodoku and chess as games. Out of the box, you can view & edit images with lightweight applications. Also, you can play sound files.

Another innovation is the SliTaz panel, from which you can install. In my case, installation was not possible because a file was missing. I wonder if that's because this is a release candidate.

Also, SliTaz does not come with an office suite, but it is installable, along with video players and other packages.

If Linux Is Dead...this Is a Zombie Apocalypse! 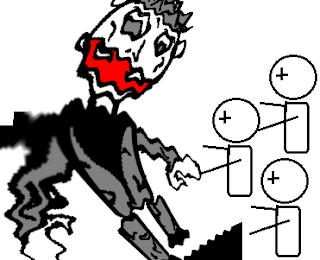 Linux is dead on the desktop...and it died long ago. Who hasn't heard that?

Apparently, the 1,500 school children whose happy faces could not hide the illusion of using a laptop for the first time didn't. They just received their own Linux-powered computers...wow! That's a lot of dead computers!

True...1,500 dead PCs is far too modest to worry about...but the total number of Linux computers that the government will give to students for educational purposes is 25,000! Whoa! Now, that is more than enough to call it a zombie apocalypse!

In other words, a minimum of 25 thousand children will use Linux without even knowing it--just as the student who asked me if I could let her use my netbook to do her registration process at the university--to start their learning about computers.

This is a desperate situation! Dead computers are about to attack the youngest generation in my country! These poor children might even start looking for the dead programs they use at school in other computers...can you picture it? They will look for alive computers and might even prey on them! Furthermore, these kids are going to grow up as mini-zombies unable to think and choose for themselves as we adults do--especially when it comes to computers--because a dead OS will eat their brains up!

The world is about to end!! HELP!!!
Publicado por Megatotoro en 6:19 2 comentarios:

Apparently, the first batch of Raspberry Pi will be available for sale soon.


I want one, of course! Can't wait to get my hands on one of those!!!
Publicado por Megatotoro en 6:39 1 comentario:

Looking for Windows Drivers and don't Know Your Hardware? TUX will Help!

Some time ago, a colleague asked me to find the drivers for her XP laptop. She didn't have the rescue discs, her recovery partition didn't work, and her knowledge of the computer's hardware was equal to zero.

The driver hunt took me some time...especially because first I had to find out what hardware that computer was using and the owner of the pc didn't help.

Today at the Mepis Forum, a fellow Mepis user named Uncle Mark posted a similar experience. However, he had a better idea than just going the painful "Windows way": He used Linux!

He booted a Mepis 11 Live DVD, and once on Mepis, he opened the command line and typed:

Following that, in his own words:

"And there it was, pretty as you please, a list of all the hardware with vendor names and model numbers. Copied it to a text file, then onto a thumb drive, and went back to my desktop."

Back in my Windows days, if I had witnessed someone doing anything like that, I'd have told that person: "forget about Windows and install that magic system instead, please!" :P

Too bad too many people in the same situation won't notice and will go with the Win installation anyway...

Still, this is a very fine trick I'll make sure to remember! Thanks, Uncle Mark; thanks, Tux!
Publicado por Megatotoro en 9:21 2 comentarios: 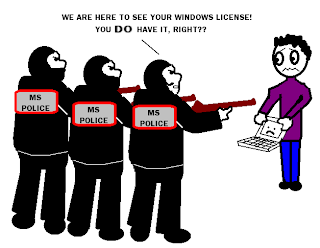 About six months ago, Microsoft said it would be "enforcing anti-piracy more actively" in my country. It seems many people here did not understand what that meant. At least until last week.

The result? So far, Microsoft has:

Not bad to begin the year, huh?

Microsoft raids will become a stronger headache for those businesses whose owners had the wrong idea that paying for Windows and MS-Office was stupid when you can get it "for free." What about considering absurd to pay for extra licenses once you get one because you can simply install the same disc on as many computers as you want?

Fortunately, MS is being harsh on businesses only. Microsoft officials say that they work with domestic users through education. That's so kind of them! (if you believe them).

Still, there's a very simple lesson people and businesses have to learn: If you want Windows and MS-Office, PAY!

If you don't want to pay but still want to use MS software for your business, better treat your employees REALLY well...or wait for the visit of your nice Microsoft friends. There's even a site people can use to denounce pirates!
Publicado por Megatotoro en 17:29 2 comentarios:

Care for a Little Fedora?

Well, I did it! I enrolled in a Linux course online! :)

Of course, the motivation from Mechatotoro helped, hehe!

I'm pretty excited because it is my first formal computer training! Although I've taken online courses before, this will be special, I'm sure!

Apparently, the distribution we will learn about is going to be Fedora.

Hehe! Nice! I got a Fedora CD with a Linux magazine I bought some time ago.