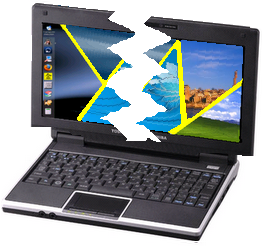 I've been experimenting with several utilities on my little Netbook Toshiba NB-100.  Concretely, I plan to use them for educational purposes, once I give them a twist (they have not been planned initially as educational tools!)  Yesterday, while I was fiddling with Platinum Arts Sandbox, I must have pressed a weird key combination.  This caused the speaker output of my MEPIS 11 system to go mute.  Of course, I didn't realize because I usually turn down the computer's master volume to work in my office.

Later, I went to my class.  Since I wanted to show a movie to my students, I turned the master volume up...It was then that I noticed I had a very silent MEPIS system!

I didn't have much time left before my class...maybe it was three minutes before it started.  Most of my students were there already and I had all the equipment set.

I checked Alsamixer in a hurry and apparently everything was fine (I did not get as far as to check the speaker control).  I had no time to investigate...

What did I do?

I rebooted my netbook using Pardus this time.  Pardus played the movie without any issue and nobody knew about my previous agony.

After my class, I booted MEPIS again and, since I was not under stress any longer, I quickly found the culprit: that muted speaker!  It was solved with a simple click.

This situation made me think about the eternal discussion around multi boot computers and virtual machines, usually fueled by notions of fragmentation vs. wholeness.  Many people think "Why bothering with a dual-boot computer?  Install the other system as a guest in a virtual machine!"

In conclusion, multi boot systems, although fragmented, do have their advantages over those that are hegemonic. Too bad then that Windows 8 will make multi-booting systems more difficult to set up.

Now that Pardus has gone to Debian, PiSi, its package manager, is gone.  That's sad because it was part of the identity of this distro.  I must say that this new Pardus is very stable and its package variety has increased a lot (thanks to Debian), but I still miss PiSi.

I learned recently (and it has been discussed in the MEPIS forums) that the new release of SolusOS will go away from Debian and will become independent...but adopting PiSi.

Hey!  That's good news!  PiSi won't fade away into oblivion!  I always thought that it was a great tool.

I don't know much about SolusOS (except that some MEPIS fellows are very fond of it), but now the bold move by its developer (leaving Debian to search for a new path) really made me interested.

I wish the best to the members of SolusOS community.

By the way...I feel it's time for me to download SolusOS now...
Publicado por Megatotoro en 19:50 2 comentarios:

MEPIS users like me are excited and in a state of download frenzy: the second alpha of MEPIS 12 has been released!

Susan Linton already summarized what is happening.  Her article is here.

Well, congratulations to Utopia...I could tell by Susan's note that Turbulence, his wallpaper, was the chosen one! 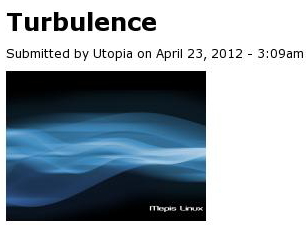 Just an important detail: this release is for testers.  Although some are reporting already that it is very well built, it is not meant for daily use.  This release is indeed at the beginning of MEPIS 12's development cycle.