Back in the old times, the little DOS game Jetpack became a legend. I came to know about it too late...the game was no longer available for sale. Still, it had been released as freeware. I spent many hours trying to help Jetman achieve his goal...but most of the times, I got him killed. Then, I used the level editor that came with the game to make my own levels and had many more hours of fun...

I remember that once you closed the game, you could read "Wait for Jetpack 2 in 2000."

I waited eagerly for the year 2000. Along with all the mystery and the Y2K fear around me, I kept the hope of seeing a new Jetman flying and avoiding all new sorts of dangers. However, Jetpack 2 was not released that year.

Then, I stumbled upon Jetpack HQ, where Adam Pedersen--Jetpack's creator--posted updates on the status of the project. Unfortunately, Mr.Pedersen has been through lots of difficult situations which have caused multiple delays and interruptions to Jetpack 2.

Today, I was very glad to learn that, even though his present situation is still hard, he is feeling better and he is taking Jetpack 2 back on track. Mr. Pedersen is about to finish the level editor!

The next test release will be out in about two weeks, according to the developer.

The game, when completed, will be available online, and also for Linux, Mac, & Windows!

Will I buy it? YOU BET! Who says we Linux users don't buy software?
Publicado por Megatotoro en 16:58 1 comentario:

Malware Took over a Pendrive? Linux Goes to the Rescue 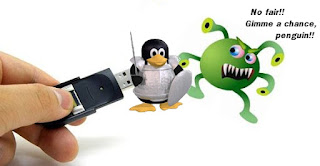 I had been away from blogging for a month. I've been working hard on several projects and, since my Linux systems work seamlessly, I've been able to concentrate all my efforts and energies in those projects.

Today, a coworker asked me for help. Her pendrive had been infected with malware and thus, her folders and files had been hijacked. The virus made them invisible (for Windows; they were perfectly visible on Linux, :P) and, as usual, there were some fake folders with the names of the original ones. Of course, the fake folders were no folders at all...they were files pointing to the virus.

What are the Windows ways to recover from that?

1. Downloading any "savemeplease" software (trial version), installing it, and then running it.
2. Running a very good antivirus while hoping it will make things normal again.
3. Using the Windows command line to correct the problem.

Well, I decided to use the third option, just for the sake of trying it. I ran cmd.exe.

Hmmm...it didn't work. Perhaps I should have chosen option 1?

Well, instead, I just used my Linux system to copy the folders from the pendrive and back. In this case, I didn't need anything else. The magic was done. Right, just by doing that.

Hey Windows users, Linux doesn't bite. The penguin is friendly and it certainly can help you a lot. I don't even remember the last time sweat ran down my temples and I hesitated before plugging my pendrive into someone else's PC.
Publicado por Megatotoro en 15:16 5 comentarios: