To all of you, my best wishes for this coming year!!

Wow!  While I am hearing the fireworks outside, I am also downloading.

When Linux Education Reaches Teachers: The Case of LekitOS

When talking about effective education, most people think of students as the ones being empowered with knowledge and new skills for creating new paradigms.

I've taken all that with a grain of salt.  Why?  Because I've always thought those who hold that optimistic view often miss something important.  Sometimes they have a too idealized view of students or education, or they do not consider very important variables, or fail to create a methodology according to the target culture, among other possible factors.

For the most part, all the optimistic talk is about students.  But what about teachers?  It is impossible to form free, empowered students if the teachers are slaves.

How are students supposed to become creators of knowledge if their teachers do not create anything?  It's even worse when such teachers are happy by simply recreating patterns (because these teachers have been trained and programmed to think those are the "empowering/liberating" patterns.)

This is more evident in the case of technology in the classrooms.  Most teachers have been literally programmed to think that technology education means using a couple of tools (mostly designed by Microsoft.)  For instance, a teacher who is incapable to say the concept "multimedia presentation" and instead says "Powerpoint" is simply too strongly enslaved to be talking about "empowering, liberating" technology.  For those who think I am exaggerating, let me ask: Why don't teachers say, for example, "OK students, please open your Larousse/Petite Robert" instead of "dictionary"?  How is it that in the case of technology, such metonymy is acceptable?

But today I learned a refreshing piece of news.  Mr. Santiago Camblor, an IT professor at IES Pedro de Tolosa de San Martin de Valdeiglesias, in Madrid, Spain, has become an example of the creative power of truly liberating knowledge in the hands of empowered teachers.  He took GalPon MiniNo Artabros and tailored it into "LekitOS": a version of the distro designed as an OS for high schools. The details are here (in Spanish).

When a teacher is able to do this (and has the tools and freedom to do it), his/her example will be more effective to show students that they can also become free and find the tools they need.  It will also let them create their own knowledge to forge a new paradigm.

To my colleagues in education and education policy-making: Please, try to do the same, especially if you say "Powerpoint" instead of "multimedia presentation" or if you keep mandating your students to use "Word format."

A Tablet Locked with Windows 10? I don't Want it...and I Am NOT Sorry!

Recently, I went looking for x86 tablets.  If I could wipe Windows off and experiment with several OSs (Android x86 or several Linux distros), I didn't mind paying a higher price. 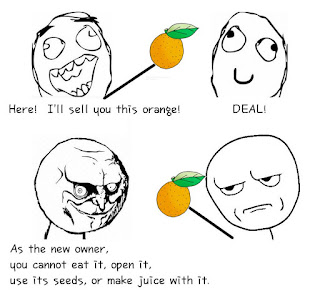 I saw that a company called Visual Land offered several x86 tablets and Android tablets.  Interestingly enough, the specs of their android tablets were lower than those of the x86 ones, that surely enough came preloaded with Windows 8.1 or 10 (shrug).

I sent an e-mail to the company's tech support.  After a couple of days with no reply, I contacted customer support to know if it was technically possible to get rid of Windows and install something else.  They made me go through the usual protocol:

3.  That could make your warranty void. (My answer: I understand, but I'd rather run the risk of bricking the device than being tied to Windows.)

At the end, the man from customer support told me he didn't know if it could be done or how hard it was.

A day or two later, I received the reply to my e-mail:

That's disappointing!  After all, I am buying hardware and they are selling hardware.  Why should they care what I do with my tablet after I buy it if I'm the owner?  If fiddling with my device voids my warranty, I'm perfectly willing to accept my responsibility, but why wouldn't they let me use the hardware I rightfully bought the way I want to?

As I replied to the company, I'll look for a company that cares more about its customers.  If we pay, we deserve respect...and respecting customer  freedoms is a good start for any company that values its customers.
Publicado por Megatotoro en 15:52 1 comentario: