Having Fun with Pisi Linux 1.0

I installed Pisi Linux 1.0 KDE two days ago and I've been exploring and customizing it to my heart's content.  This has been my experience so far:


1.  Yali did not let me use a partition I had prepared previously.  It was necessary to use Yali to delete my partition and create it again for Pisi to start installing on it.  That has happened since my old times with Pardus.

2. Once installed, Pisi greeted me with a new color at the boot-up.  I like the black background on both GRUB and the booting screens.  The log-in window looks better, too.

3.  Unfortunately, the bug that causes glibc-locales-es not to be installed is still there.  As a result, a Spanish localization throws an "unsupported locale settings" warning and the system ends up being in both English and Spanish.
The problem can be solved by opening a terminal and typing

However, unlike with the previous releases, I realized that this time I also needed to manually download kde-l10n-es.  I used the package manager, but that can also be done by entering this in the terminal:

After that, I had to go to system preferences, locale, language, and there I had to set Spanish as my preferred language.  That took care of the problem.

4.  LibreOffice and the other applications have not let me down.  Pisi comes equipped with most of the software I use.  I just had to install VLC and a few games and accessories.  I customized Firefox with a cat theme (and set it to Spanish thanks to the add-on "Language Pack Install Helper 2.5").  I also used the same Firefox theme on LibreOffice.

5.  Now VLC handles sound of .MP4 files better.  Still, some sound funny.  The same goes for .mkv files: there is an improvement but there are still sound glitches that do not occur if I play the files with other applications. 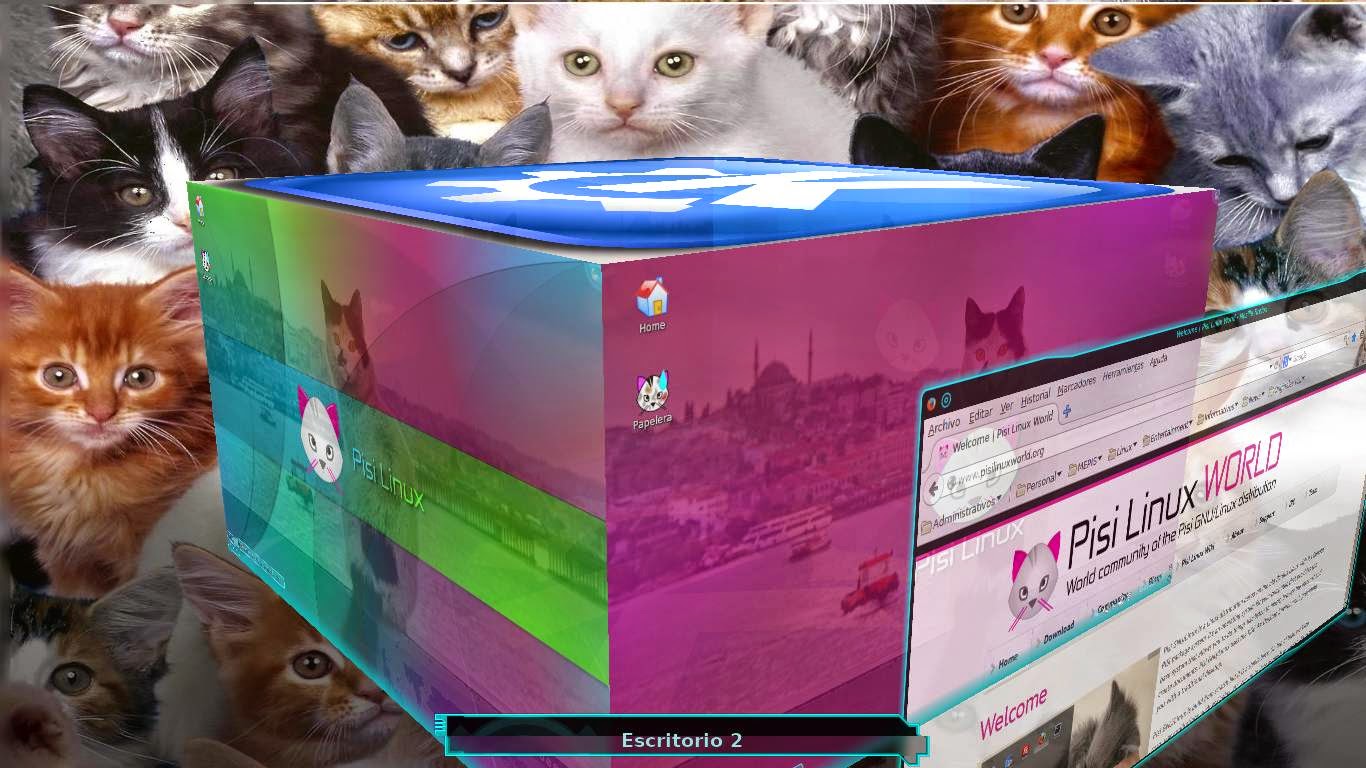 6.  I am very pleased to see that all the KDE glitches I encountered in the previous release are gone!  Now there are no Kwin rendering problems with the desktop cube, nor with the background while rotating the cube.  Also, now my log-in sound works all the time.

I did notice a small rendering glitch, however.  It happens on the Ghost window decorator when you resize a maximized window: the left and lower left sides of the window glow are incorrectly displayed, but that only lasts until you move your mouse.  This is it: 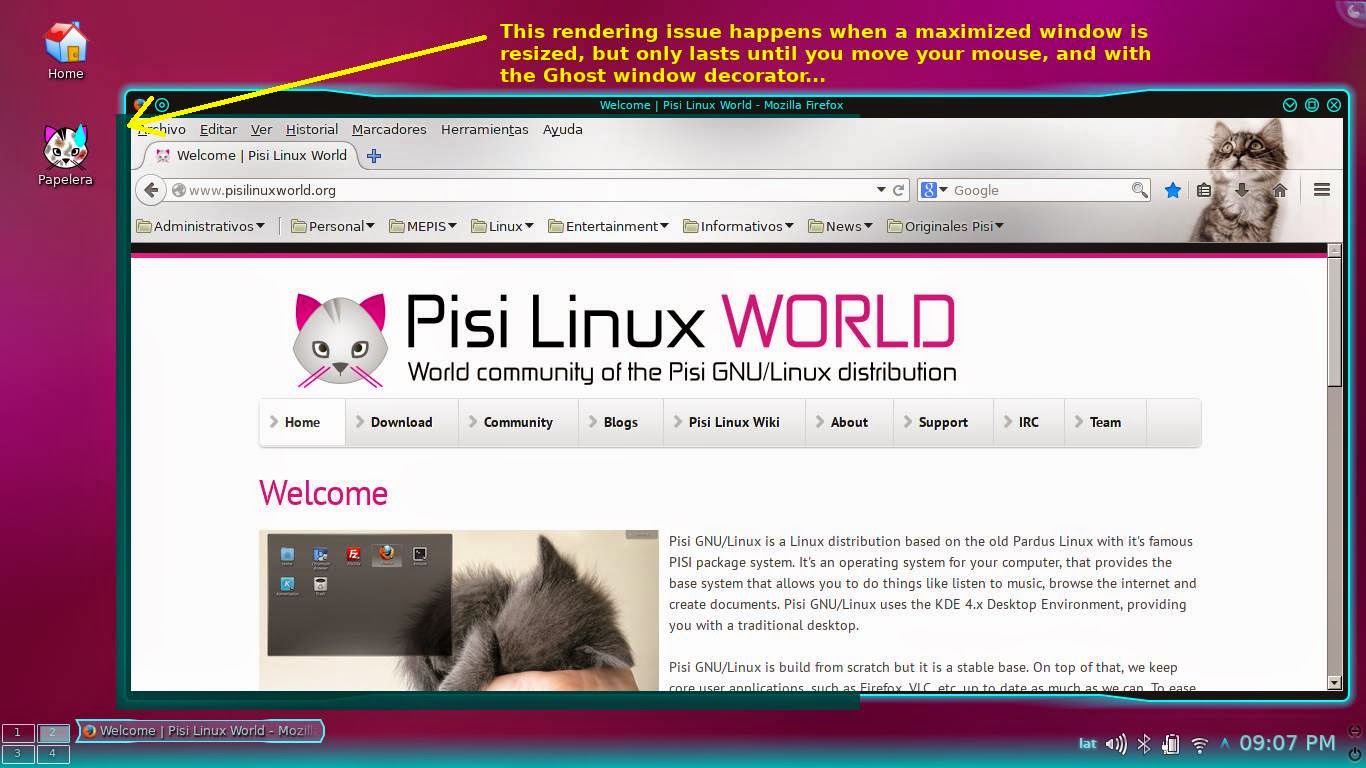 What about wireless connections?  Mine worked flawlessly from the start.  Youtube videos?  No problem.  Even my bank's page with its annoying plugins (designed for Internet Explorer) works.  I've also plugged it to a TV screen and it has been up to the job

Compared with the testing releases, the final version of Pisi is absolutely an improvement: the system is fast, responsive and very stable.  It is still lacking software (it has  6325 packages at the moment), but it has pretty much what I need, especially if we remember that this distro is made by a very small team.  I will use my Pisi system at work next week and I'll keep having fun with it.  Pisi, in spite of its limitations and all the obstacles that have delayed its release, is truly a little jewel and seems very promising.
Publicado por Megatotoro en 22:18 5 comentarios: 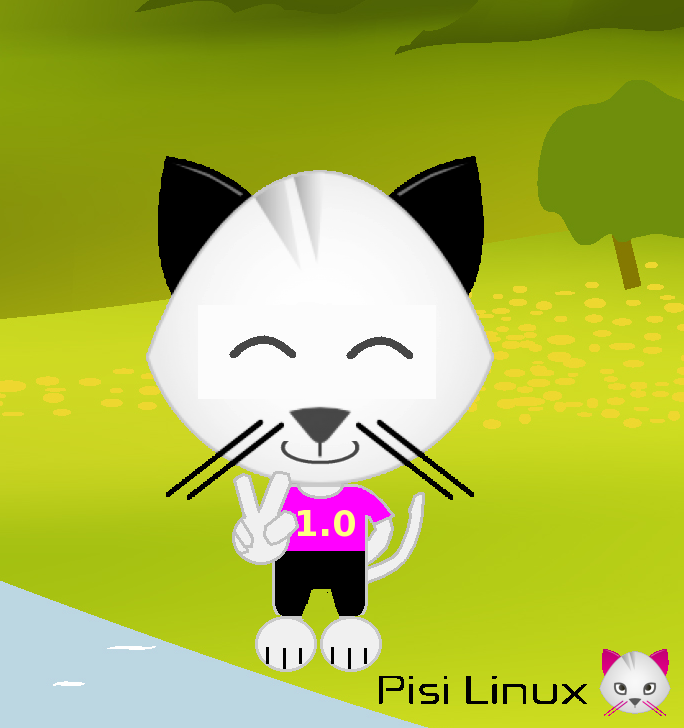 This is great!  Pisi Linux 1.0 has just been released!  I'm downloading it at the moment.


Here's a note from the developers, the Anka Team:


Pisi Linux, born new from the ashes.Pisi Linux stable version is now for download available.
Go to the Download section at this Homepage
This is the result of a dedicated effort:
- Clean and immaculate work; because we refuse to use certain technologies, we will reject,
We will not use questionable packages.
- Fast, very fast operating system; moreover, do not damage the equipment when you
have a configuration.
- Stable, and even quite a stable distribution; frequently than to format
We hope you'll get rid of, we aim.
- Powerful but elegant work; stitch by stitch touched, were prepared.
- Hmmm, if they did targets, for all distros? So dear to us
Of course it is. Our every move, our every move towards this. Yes, yes, quite a few were able to also.
A little bit of "Let the dust" as ...
Yeah, pretty nice, very nice work, nice yes, despite missing one of ...
Get better!
"The next version, 1.1, 2.0 .. will be arrived when? .." That is a good question!
But it was a good idea when you will step in and help us when you ask:
- "What can I do for pisilinux?"
- "I know how to fix this error, how Etsen you?"
- "Farm to build servers have something to do, if I know where to go?"
etc. ...
We need more Personal and institutional support for Pisi Linux, you are more than welcome to help us with our work!
If you will be help us please write a mail to us with a short description from you to: admins@pisilinux.org
With Love and respect and Thanks for be Patient
The Anka Team 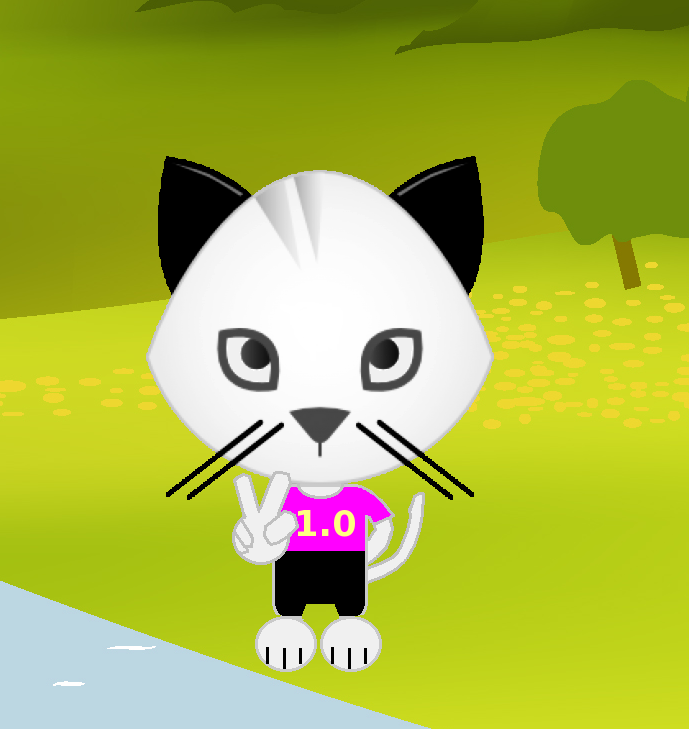 Although Pisi Linux 1.0, the heir of Pardus, has not yet seen the light of the sun and its development has been slow, it does have a base of fans waiting for it (I'm among them!).

The release of the long awaited Pisi 1.0 is coming nearer each month; my kudos to the Anka Team that, although small, have been working tirelessly to make their dream come true.

Here is the latest update at Pisi Linux World:

Hey everybody, here some news about the Pisi Linux project. The work still continue and we are close to an official 1.0 release. We appreciate your patience, but we are a small team so things go slow. The development of Pisi Linux is good and it is very stable. The team is now testing the last ISO before the official 1.0 release ...
Publicado por Megatotoro en 10:06 2 comentarios:

Linux also shed users.  It went from 1.74% to 1.68%.  Well, that's not precisely breaking news.  :P  Linuxers know our OS is portrayed in the market share as an almost invisible yo-yo.  (But hey! I'm glad I found this amazing yo-yo!  You know what's best about a yo-yo OS? You REALLY need technique to do the sleeper trick when you use it! )

Now, I don't intend to know what's happening and I won't make any predictions, either.  To me, the OS market share is more a source to satisfy my curiosity and to have some fun.

Still, I think some people may be seriously worried about Windows 8.1.  I guess Microsoft shareholders won't be happy about this news, for example.

Meanwhile, I read this interesting article in betanews.com.

One of the comments there, to answer why Windows 8 was doing so poorly, included this image: 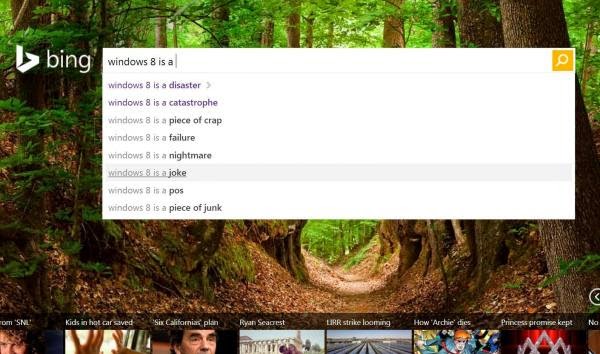 Seriously?  Did Bing come up with those results?  That must be a joke!  Anyway, the image tickled my curiosity.  I tried Google search to see if it was as harsh as that supposed Bing search:

Well, there you have it!  If the Bing image is real, Google seems to be less cruel!