Setting up a Spanish Keyboard on my Chromebook's Lubuntu

Today I learned this easy and useful trick thanks to Longtom, at PCLOS Forum!

1. Go to Menu > File Tools > File Manager Super User
2. In the address bar type  /etc/xdg/lxsession/LXDE/
3. Open the file “autostart” and add the following :
setxkbmap -layout "za,us"
4. Save the file, log out and log in

All I had to do was replacing "za" with "es" and that did the trick:

It's Been 6 Years Already! 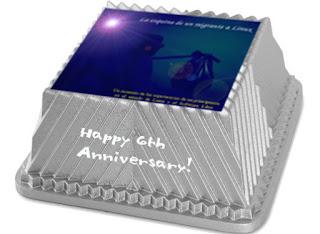 It was 6 years ago when, during a workshop about blogs, this humble account of my experiences with Free Software was born.  After countless problems, I decided to forget about all the knowledge about Windows (funny, I thought it was about computers back then) that I had accumulated in around 15 years and migrated to the land of Tux.

I left my power user status...

I left many of my games and favorite apps...

I left the comfort of warranties and a solid customer support...

All to search for a totally new land.  An unknown world in which, surely enough, I would be a newbie again...

Wait a minute!  I never enjoyed warranties and much less a customer support of any type!  All I got was formatted hard drives thanks to those working in computer shops that were not directly related to Microsoft.

Also, I remember I left a land of viruses, Trojans, beacons, and malware of all possible kinds.

I left a realm of "this cannot be done" and of Blue Screens of Death.

I abandoned a world of constant system checks and paranoia.

And now, after 6 years as a full time Linux user, I can say:

I still don't know most of the command line.

I found excellent apps and my game collection is constantly growing.

I still need the help of those who kindly keep the forums of my distros.

I still get amazed at the advantages of using Linux.

I still have no idea of how to compile my kernel.

I may be a perpetual newbie, but the knowledge I've accumulated in these 6 years doubles that of my 15+ years using Windows.  I'm proud of that!

Some days ago, while I was playing Steam games on my gaming partition, I noticed that my system (Pardus 2.0) started misbehaving.

I don't blame Pardus.  After all, I had done lots of risky updates in the past (I even went from Pardus 2013 to Pardus 2.0 a la rolling release style.  Of course, that move made my system a bit unstable but it was perfectly usable.)

However, last week, Pardus threw a weird error and refused to start.  I tried to run fsck to no avail. I guess that was because of my Frankenstein system. That meant that I couldn't access all my Steam games and my other local games.

Since I did not know how to repair that broken system, I went the easy way: formatted the partition.

Then, I tried Pardus 3.0.  Unfortunately, it was ridiculously slow to boot and to turn off (due to a pending process at start that was also present when I moved from 2013 to 2.0 but that I had forgotten how to repair.)

Thus, I started to look for other options.  I wanted to settle for Mageia, but upon installing, it would ask me for an UEFI partition I didn't have and which I didn't want to create.

Finally, I decided to try MX-15.  I was reluctant to do it because I had tried the game Never Alone on MX-14 and it didn't work.  I was pleased to see that my testing MX-15 system ran the game smoothly.  It was time to install MX-15 on my gaming partition then.

But alas!  The installer showed me a warning that my partition had some problems. The system would install fine, but I was told to expect errors more often in time.

Well, I guess that can't be helped.  The good part is that I use that partition only for gaming and losing all my progress will not make me lose my sleep.  After all, I am a terrible gamer and I have already finished the games I was hooked into (Violett, Nihilumbra, Finding Teddy, Detective Grimoire).  Too bad for my long way in Limbo, Incredipede, The Bard's Tale, Never Alone, This War of Mine, etc. But I don't mind to start those games over again.  Actually, it sounds kind of fun.)

I am happy I have a multiboot computer. Also, I am happy I use Linux: you can try as many distros as you want and installing them is fast.
Publicado por Megatotoro en 16:27 1 comentario: