Advances and Paradoxes of Computers

I'm having too much work lately. Thus, for the sake of fun and my own sanity (or whatever is left of it,) I'll post two cartoons about some paradoxical advances we have seen in the world of computers. I've got a feeling that we are experiencing the Nietzschean Eternal Return. :P

Have you witnessed any other radical advances like these? :)
Publicado por Megatotoro en 15:55 4 comentarios:

Aroint thee, Linux Penguin! Thou Hast Made Me Look like a Fool! 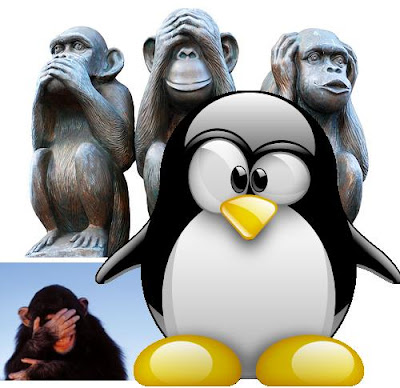 The following is a historical account of some events in which different Linux distributions have made me look like a fool. Read on, ye reader and learn about my misery.


1. I had installed Pardus on a student's laptop some time ago.
Her Vista system was almost dying. A week later, she told me Vista got totally damaged and wouldn't even let her enter her account. Then, I lost contact with that student. That worried me because she had just met the big Turkish cat, so I expected a myriad questions from her. Since she didn't contact me, I assumed she had given up on Pardus and had reinstalled Vista.
Then, I met her again. I asked her about the state of her computer and got ready to hear how she had sent Pardus to Cat Heaven, but she said instead "Great! I love Pardus! I could even fix Vista with it!"
I haven't yet fixed any unusable Windows system with Linux and she fixed her Vista herself? Is she a Linux genius? She is indeed a smart girl, but far away from the geeky type AND she's a total Linux newbie. She says that she can't figure out LibreOffice's Calc, for example. But she could fix her Windows with Pardus...How does that make me look? Megatotoro: Thou art a fool!

2. I installed Pardus on my mother's computer:
I still remember her reluctance to use Linux. I also remember many comments from people saying "Linux is not for Mom," but I simply closed my ears to them.
Yesterday, I went to her house and we spent some leisure time watching funny Youtube videos...I thought I'd be in charge of doing the computer stuff but believe it or not, Mom was using her Linux computer! Again, I asked myself: Is my mother a gifted computer user? Is she a power user? Unfortunately for me, she is neither...so much for genetics making me a genius, too! The truth is that my mother is a regular computer user whose needs rarely go beyond surfing the Web, typing mail or documents, and playing her favorite little games. Pardus hasn't let her down and has built her computing confidence up. Silly ye, Megatotoro! Thou hast underestimated Mom's computer-using potential and Pardus rubbed thine silliness on thine very face!

3. I messed up my Mandriva system.
Unlike my brother, whose main system is Mandriva, my Mandriva skills are very scarce. I use it, true, but maybe twice a week. Mandriva is one of the alternative systems I go to when I want a change from Mepis 8 & 11.
Anyway, one day I tried to play mad scientist with Mandriva and something went very wrong. The worst part is that I made newbie's mistake 001: I didn't even remember what I had done (because I didn't have any idea of what I was supposed to be doing.) My Mandriva collapsed! Recalling my 10+ years of Windows training, I got my Mandriva Live CD ready for wiping my damaged system and reinstalling a new one.
But the mad scientist was still there. He told me to wait. Since Mandriva was already done with, it wouldn't cause any harm trying to fix it, would it?
"Megatotoro: you are indeed stupid!" I barked to myself. "What on earth makes you think you are capable to fix Mandriva? It is different from Mepis!"
Still, I read the messages my dead Mandriva sent me from its Mandrivish Heaven. It urged me to try I don't know what command. I made Newbie's Mistake 002: Didn't take note of what I was doing.
I just remember Mandriva asked me many questions that went like "Do you want to fix [insert something unreadable with a number here] Yes/NO?" I chose "Yes."
That went on for a while. I pictured myself like Homer Simpson working in the nuclear plant and pressing a button when prompted by the system. When I reached number 900, I got tired and turned off the system. Newbie's mistake 003: Instead of turning my PC off, I chose "reboot." Thanks to that, I saw the computer start while I still had the CD on my hands.
When Mandriva booted, it started fixing itself! Whoa! That's MAGIC!
Did it work? You bet! My Mandriva is as good as always. Was it a lucky strike? Well, very likely but I never got such lucky strikes during my Windows decade, even if I had better tools and much more experience. Linux, by fixing itself, made me look like a double fool. I, the Penguin, can stand thine foolishness and can come up alive. Thou ought to try harder to kill me...

The moral I learned after my pride was shattered: You don't have to be a genius anymore to use Linux. Any plain, regular individual may use it provided that he or she remembers it is something different and thus wants to learn about it.
Publicado por Megatotoro en 8:29 6 comentarios:

Sometimes Games Are not just about Fun

Maybe I'm discovering boiled water here, but today I stumbled upon a little game. I downloaded it because it was very small, so even if it was bad, I wouldn't have wasted too much time and space with the download. Its name is Gravitation, and it was released in 2008 (wow! that says how much into gaming I am these days!

I expected spaceships or something, but the description was quite unusual: "A video game about mania, melancholia, and the creative process by Jason Rohrer." Well, I could feel all that and even a bit of confusion while playing the little game. WARNING: If you are one of those kids deeply immersed into zombie-killing and hi-octane racing frenzy, you would probably not enjoy this game. In fact, the artwork would be more than enough to make you scream and run away as if it were a real-life zombie: 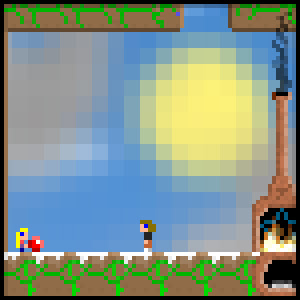 If you, nevertheless, have the guts to try it, let me say that it will be a different experience. Since I didn't quite understand what I was doing in the game, I decided to investigate a bit about it. So, gravitation led me to its predecessor, called Passage. I know this is old news for some because Passage was really famous about 4 years ago. This game has an interesting?/unusual?/striking?/shocking? feature. Check out the character you manipulate as you play...

If you didn't know about these games and still have followed me this far, I urge you to try both. Then, whatever your reaction about them may be, please go to the author's page and read the game explanations. You will find something really serious about gaming there. I won't say anything else because I don't want to spoil your fun.
Publicado por Megatotoro en 13:54 6 comentarios: 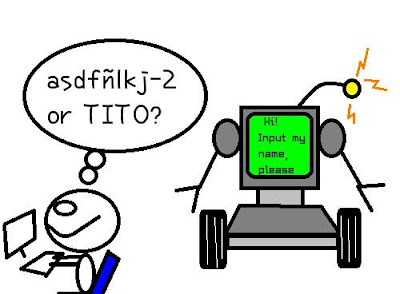 This has been quite a controversial weekend in the world of FLOSS. First, apparently a Linux expert wrote an article stating his return to Redmond's OS, and then there was another article criticizing the names FLOSS developers give to their creations.

Concerning the expert who went back to Windows, I don't judge him. People are free to choose whatever they want. After tasting the waters of Free Software, I said I don't want to go back...but does that mean that I will never go back? I don't know. So far, I don't see any reason to. But I didn't see any reason to abandon Windows when I moved my house to the Realms of the Penguin, either. Even so, Linux captivated me based on true merits and not on advertising. But the future is so uncertain...Who knows, I might end up using Apple's creations (don't think so, though) or become a full Haiku or BSD user...or maybe I'll use something totally different.

What I do know is that whatever OS becomes my main OS in the future, it will be because I chose it, not because somebody imposed it on me. The same goes for the cloud. I will always thank Linux for opening my eyes.

Now...the business of the names seems to me less justifiable. I don't see why people criticize FLOSS names so much using "the corporate world" as the supreme standard. In fact, the corporate world is full of silly, poorly descriptive names, too. Mechatotoro had mentioned something about this before here. Now, what I find absurd is that just because people do not know how to pronounce a foreign name (Mageia, for example), they feel rightfully entitled to bash such name. That attitude says worse of those complaining than of the names themselves. Learn to pronounce it and problem solved! These complaints are even annoying when coming from English-speaking individuals, for pronunciation and spelling are not often transparent in this language. Will your brain explode for learning how to pronounce something in a language other than your native one? I don't think so.

What about silly names? Ubuntu nicknames come to mind.

While I'm not a big fan of Ubuntu's release nicknames, I don't see any problem with them, either. Developers name or nickname their releases at their will. Don't like it? Then help develop and earn your right to change those names! :P

But what about Kaffeine, K3B, GNOME, and so on? Some people will tell me "C'mon! They are indeed SILLY!"

Sillier than Windows Vista and Vista/7 mega-killer "new" feature, the one that goes by the name of "POWERSHELL"?

What's that? What does that tell you? Power Rangers meet Ninja Turtles?? See? Subjectivity is not a problem of the name, but of the audience.

"No! Its name is appropriate because it describes what this shell does!," will say Windows Defenders (another great silly name! Let's defend the windows...and the walls...and the doors!)...Still, PowerShell is a cheesy name...it's more appropriate for third graders playing with their trading cards than for the respectable IT and corporate worlds. Seriously, MONAD sounds much more respectable in that sense.

Then, we have Apple and all their "iSomething" names. For some, such names sound great while for others they sound plain "iDiotic."

Still, people use Apple's creations and many couldn't live without them.

Arjaybe, a fellow MEPIS user, posted this on the MEPIS Forum: 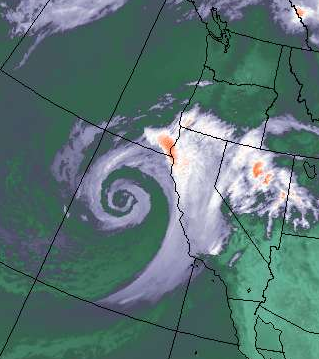 I don't know if the image is real or not, but certainly it is interesting!

I guess I'll start looking to the clouds and to the surface of the moon...maybe I can find MEPIS or other distros there! :P


At least, I found Puppy Linux on Mars! :P 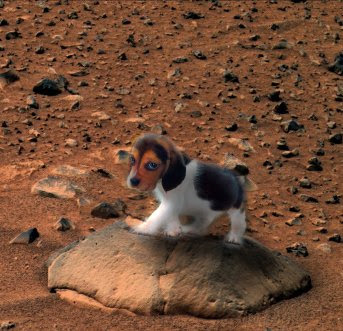 After some useful feedback from visitors to my GNU/Linux & BSD Logo Zoo, I made version 2.0 at last. This time I included Plant distros, too. With them, I tried to take into account as many other distros as I could, but let me apologize if your favorite distro is still missing.

Distrowatch, for the logos of each distro

The RPG Toolkit, for the tiles.

My visitors (That includes YOU!) 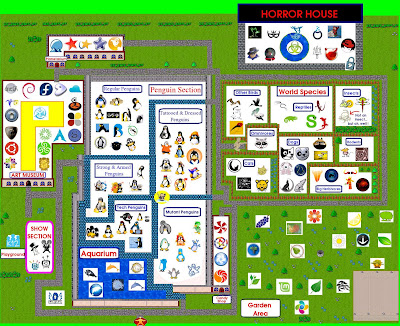 This is a short note for the followers of Pardus and Mandriva. Both distibutions have relased beta versions for testing.

For more information, follow the Star or talk to the Leopard...