Mechatotoro and I bought a new desktop PC for our mother, who wanted to replace her old box.

We went to the computer store and asked for a barebone rig.  The guy was quite amused to hear about people who did not want to add Windows.  He was a bit puzzled when he heard we would load Linux to it.  I guess he would fall off his seat if he knew the computer was not for us, but for our mother!

Then, we made a test.  Just to check for compatibility (new PCs come with UEFI, which does not play fair with Linux all the time), I took my outdated live MEPIS 11 pendrive and tried to install the OS.

About 5 minutes later, the installation was done and the store guy was amazed at the speed of the process.  "Linux has improved a lot these days!" was all he could say.

But remember: this was Mother's computer.  She should not be using an old MEPIS 11 OS to power her brand new PC.  Now, I have nothing against MEPIS 11: after all, I am typing this on my MEPIS 8 PC.

But the idea of the new computer was also having a new OS.  "What about Windows 10?", I asked her.  To put it diplomatically, let's just say she did not like the idea.

Then, after some thought, we installed MX-15.  Mechatotoro then customized the desktop with a full theme of THE WALKING DEAD that he designed for the occasion (Yes... Mom's a BIG fan of that show.)

The result?  Our mother couldn't be happier with her new spooky PC!  That surely gives a new meaning to zombie computers!

When I see Mom sitting happily in front of her computer, I think that all those people who claim Linux is too hard and that only computer geeks can use it are still living in the past, and a very distant one, by the way.  They might have missed one --or several-- important upgrades.

Too bad for them!  While they catch up, our mother will be using her zombie PC that runs MX-15 (an OS she had never touched before) and does EVERYTHING she wants.

What about Mom's old computer? Mom gave it to Mechatotoro's daughter so that the 5-year-old girl may use PicarOS (a GalPon MiniNo edition special for kids) to her heart's content.

Most people I've talked to have reactions to constant "upgrade to Windows 10" nagging windows that range from anger to desperation.

I wonder how they'll receive the new fullscreen "reminder" from Microsoft. This one: 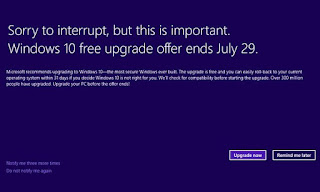 I guess they will not take it very well, either.  If they complained about a small window, a fullscreen interruption will probably make them rabid.


But why being so negative about it?

Here are some examples of interesting and positive ways to take your Windows 10 nagging screen.  :P 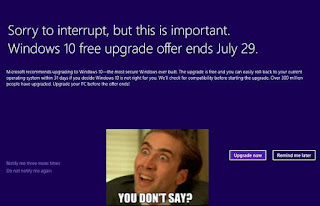 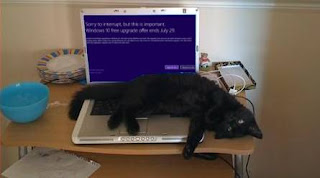 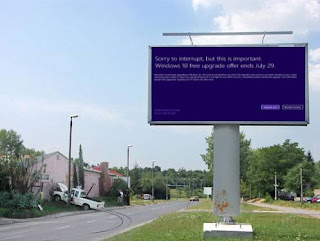 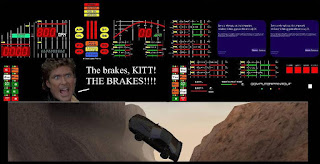