Own an Old Computer and Dislike Puppy? Meet MiniNo:

When talking about old computers and a Linux distro to make them usable again, most people think "Puppy Linux."

Puppy is indeed amazing! It loads totally on RAM, so you may use the CD drive. It also comes with applications selected carefully for working. According to its developer, it "works on PCs with very little RAM, probably as little as 32M." That is indeed something!

I like the piece of advice that Puppy's developer gives to those wanting to try this little distro:

"So, the question must be raised, why are you running Windows to copy the files off the Puppy CD? You need to wean yourself off this dependence on Windows. Boot the live-CD, then you have a running Puppy!"

I tried it on my old computer and I liked it.

However, there might be people who might not be comfortable with Puppy. I remember Puppy had problems "catching" my mouse. Also, Puppy seems not to be multilingual...it asks for your locale, but at the end, I got an English desktop.

So, for those who want to revive an old PC, don't feel comfortable with Puppy or don't speak English, there is an alternative...GALPon MiniNO Linux. MiniNO is a Spanish word for "cat"; it even "caught my mouse"! :P

GALPon MiniNo is a distro made in Spain. It boots in Spanish, English, and Galician. According to its developers, "it has been tested on systems Pentium 117MHz with 32Mb of RAM and only 1Mb of video memory and has played different video formats without problems."

Citing its developers, "the project Minino started as an approach to build a distro somewhat updated for computers well-built, that is, systems that stand like no others the weight of the years, dust, extreme temperatures, hits, tension rises and the many clumsy-handed who beat up their keyboards and trashed their guts". Any question?

MiniNO is much bigger than Puppy; version 1.2 "Alguadaira" is 435 Mb. Of course, it includes a word processor (Abiword), a spreadsheet (GNUmeric), games (I liked Circus Linux!) a burning tool (it actually could manage my problematic DVD burners) and many other tools. Its desktop manager is IceWM, so it is a bit more familiar to Windows users than Puppy's JWM. Since MiniNo is based on Debian, it has lots of packages available, too.

MiniNO caught my wired connection effortlessly. It comes with different light browsers (it has MiniNO browser, too!), but just in case, it includes a magic icon for you to install Firefox. Here are a few screenshots:

The official screenshot from Distrowatch: 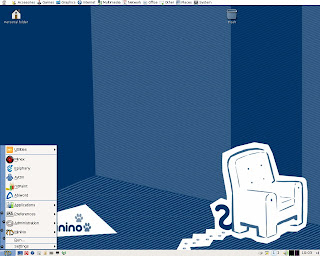 A screenshot on my computer: 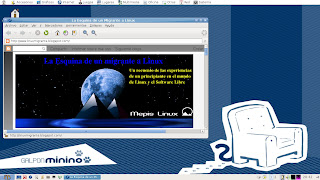 So, if you are not happy with the little dog, try the little cat! :p
Publicado por Megatotoro en 8:25